4 questions to ask before buying a used truck 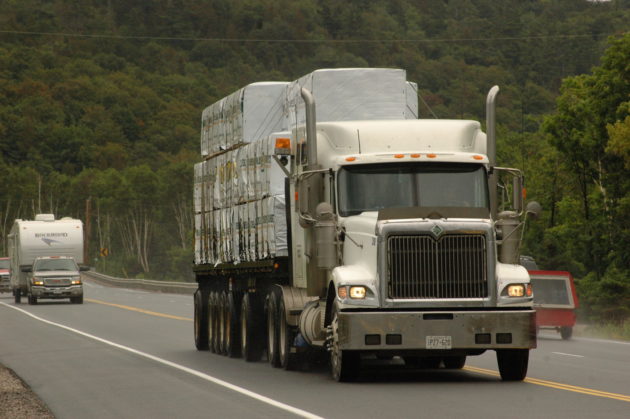 This is not your typical highway tractor. Outwardly, a heavy-spec’ truck may not look much different, but it’s a different beast down beneath the cab.

TORONTO, Ont. — You can’t buy a made-to-measure suit at Walmart. Nor can you spec’ a used truck. In both cases, you’re limited to what’s on the rack or what the dealer has in stock. Most people wouldn’t buy a suit that doesn’t fit, but apparently a shiny truck can be more appealing than the one that fits the job.

“All we can do as sales reps is try to lead them the right way into a truck that suits their purpose. If they don’t like what we tell them, sometimes they’ll just go elsewhere,” says Rob Eaton of Currie Truck Centre in North Bay, Ont.

“There are three steps to selling — prospecting, qualifying and closing,” notes Pat Tatchell, general manager of Upper Canada Truck Sales in Saskatoon. “The majority of our process is qualifying. We won’t sell a truck that doesn’t fit to a customer. It they insist on buying the wrong truck, then we obviously haven’t done a good enough job in determining what the customer needs.

“If they want to go hauling logs with an old on-highway fleet truck, it’s not going to hold up under those working conditions,” Tatchell adds.

Clearly, the dealer can only go so far in matching a truck to the customer and the job. If you want a truck to run over-the-road, then any decent fleet trade-in will do. If you want something more specialized, like an aggregate truck or a log-hauler, you may have to dig a little deeper into the dealer’s inventory.

Here are four questions every prospective owner-operator should be asking before they even set foot on the dealer’s lot.

While that question might seem self-evident, it apparently isn’t. More than a few first-time buyers seem to have little more than a vague notion of what they want to do. Some seem to be shopping for the next assignment as much as the next truck.

The trouble emerges if they go shopping with the notion that a truck is a truck, and that it will work just fine in a bunch of different applications. That thinking may apply if you’re hauling general dry-van freight if you want to switch to flatbedding or hauling containers, but it won’t work if you have a notion to take your long-legged highway truck and hitch it to an aggregate trailer or set of Super Bs. Even moving from a 40-ton tandem dry van to a 50-ton tridem dry van can have unpleasant consequences.

“Everything from the crossmembers and the suspension to the cooling fan and the U-joints may be incompatible with a heavier application,” says Eaton. “The load may not only be heavier, you might have some off-road exposure the truck wasn’t designed for — as in job sites for gravel trucks, or the bush in the case of a logging truck.”

Trucks are becoming more and more specialized. Weight, for example, is a top consideration for highway trucks, while durability is a higher priority for the more severe applications. You can’t expect a stallion to do a plow horse’s work. At least, not for very long. 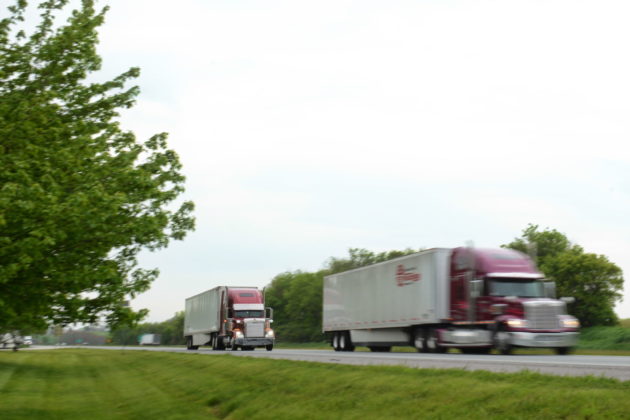 Highway truck are spec’d from new to keep weight to a minimum. Since longevity isn’t an issue for first owners, they sacrifice life for weight savings. The second buyer can pay the price.

The answer to this question is absolutely application-dependent. Who wouldn’t want a 550-hp/1,850 lb-ft engine to haul 80,000 pounds around the U.S. Midwest? Should you buy the biggest engine you can find? Not unless you want to accelerate your trip to the poorhouse.

Let’s face it, if you have the horsepower, you’re going to use it, and you certainly do not need that kind of power in a “light-duty” application. Fleets buy 450/1,650 engines for a reason. You should take a lesson from them.

On the other hand, if there’s a B-train in your future, then you’ll absolutely need big power. You do not want to under- or over-spec’ the truck. To make the right decision, you need to be fairly certain what you plan to do with truck.

Some engines can be up-rated with a software change, but there’s usually limits to what you can do. I Cummins’ case for example, Tatchell says the engines are originally built and programmed in rating families. There are upgrades within the family, but they may not be as big as you think.

“Cummins has three engine families, and some of those families only go up to 475 horsepower, no matter how much software you throw at it,” he says. “Even if you could up-rate the engine, you’re left with probably having to upgrade the clutch, the U-joints and possibly the rear ends. If the truck was built with a 450/1,650 engine, it will probably have a driveline with similar ratings. Put a 500/1,850 engine out front and it will tear up your drivetrain if it’s not upgraded too.” 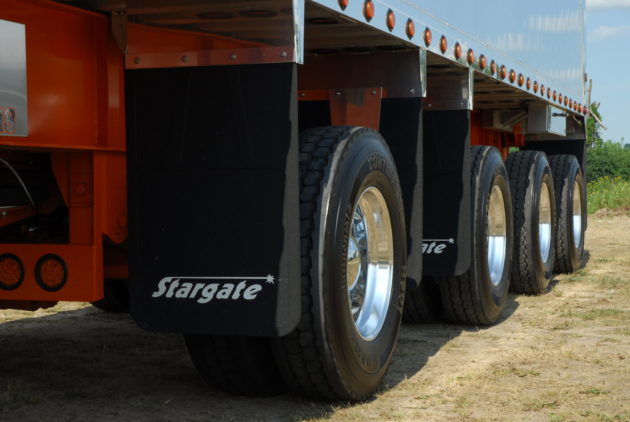 Multi-axle trailers put a lot of stress on tractor frames and suspensions. A typical highway freight hauler won’t last long under such loads.

The trend in highway trucks over the past decade has been to gear-fast, run-slow — currently known as downspeeding. Consequently, transmissions are typically overdrive ratios of 0.87:1 or 0.73:1, with rear axle ratios of 3.36:1 down to 2.28:1. It’s all about lowering engine rpm at highway cruise speed to conserve fuel. With heavier loads, tridems, quads and B-trains, a higher axle ratio is required (3.90, 3.70 or even 4.33) to keep the engine running at higher rpm where the higher horsepower can be found, and to facilitate startability and gradeability.

The bottom line here is that a coveted long-legged large-car may not get a loaded Super-B out of the parking lot, never mind pulling the Coquihalla Highway. And if you’re thinking about changing the rear-axle gear sets, you’re looking at $7,000-$10,000, especially if you’re going up to a more rugged axle.

“Not long ago, the logging trucks we spec’d here in Ontario had 4:30 and 4:56 rear-ends, because that what they needed to match the engine output,” says Eaton, who maintains he has no connection to the transmission maker. “The downspeeding trend has even hit that sector. We’re now spec’ing 3.73 rears on 22.5-inch tires. That’s a totally different spec’.”

These components are essentially the truck. They are what supports the weight of the load and keep all the wheels pointing in the same direction. Since highway tractors are highly weight-sensitive, they tend to be spec’d with components that have a minimum rating. They are designed and built to work reliably for four to five years, or for the first owner’s prospective lifecycle. If the first owner cared about having them last longer, he or she would have spec’d heavier components.

A typical highway tractor for cross-border service (with five axles and an 80,000 lb. GVW) will have rear suspension and drive axles rated for 40,000 lb. Some may be only 38,000 lb. in weight sensitive applications. But a typical Canadian-spec’ highway tractor for tridem service will have at least 44,000-lb. rear axles and suspension, sometimes 46,000-lb. Meanwhile, trucks spec’d for severe service with multi-axle trailers or trains usually have 46,000-lb.-or-higher axles and suspensions because they are under more stress while driving, and probably face a great deal more stress while navigating job sites, etc.

“Some people think because a suspension is rated for 40,000 pounds, that’s what it will haul,” says Eaton. “And it will, all day long, but it will be at its maximum load all the time. There’s little margin there for overload, and eventually the strain will take its toll.”

The axle rating (as well as tire width) determine how much weight can be loaded on an axle or axle grouping. If the equipment isn’t rated for a certain weight, it will be fined for overloading.

The same applies to the frame and crossmembers. While frame ratings are not considered when determining vehicle loads at scales, obviously the frame must withstand the vertical and longitudinal loads that it faces. Lightweight, single channel highway truck frames aren’t up to the challenge of 56,000 kg (123,000 lb.) multi-axle loads. Sure, they will pull the load, but they won’t last long.

“When I spec’ a new tractor for dump service, I usually recommend a frame insert over the suspension or from the back of the frame to the back of the cab in some applications,” says Eaton. “We want the truck to last, so we built in a little extra strength. Highway trucks don’t have that.”

Both Eaton and Tatchell say they have noticed changes in truck buyers over the years. A few decades ago, when many drivers grew up in the trucking culture or in trucking families, a deeper understanding of the equipment was passed along from generation to generation.

Today, a lot of drivers come into the industry without the benefit of that tribal knowledge. They have to learn as they go. Sales reps like Eaton and Tatchell are there to help, and they really do want to see you succeed. When they make certain recommendations, they are born of experience, not a desire to sell you a truck. Like Tatchell said earlier, “if you don’t succeed, we will eventually run out of buyers.”