Auditor general reports in Manitoba and Ontario, released last fall, uncovered some major shortcomings when it comes to enforcement of regulations governing commercial motor vehicle carriers and drivers. Not to mention the monitoring of the programs and people who are responsible for administering and enforcing the regulations as they currently exist.

The shortcomings that were highlighted in these reports do not come as a surprise to the PMTC or most other industry stakeholders, as we have been sounding alarm bells with regulators for quite some time. We believe these shortfalls are allowing non-complaint and dangerous carriers to continue to operate, and in some cases, thrive with a business case that involves willful neglect of the law, creating an unfair advantage. 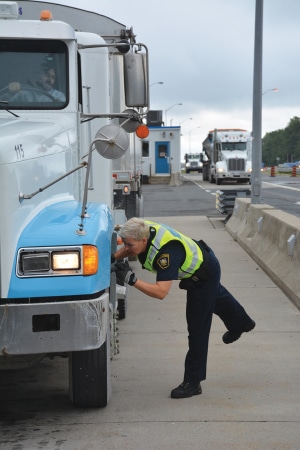 To the Ministry’s credit in both jurisdictions, they acknowledged and agreed with the findings discovered by the AG and outlined plans to either act on, or study the problems. Admitting you have a problem is a good first step, and words are appreciated, however only clearly developed and implemented action plans will solve the problems.

Too many times in the past, words and acknowledgement of problems is where the actions ended, with no clear plans ever introduced.

Insufficient human resources to properly conduct roadside vehicle inspections: In Ontario, the number of Level 1 inspections conducted dropped 22% between 2014 and 2018, while truck traffic increased by 10%.

In Manitoba, the actual number of Level 1 inspections increased by 104% from 2015 to 2018 as a result of inspection targets, however it was discovered most inspections were performed between May and September. It was also discovered that predictable operating hours of scales and mobile officers allow non-compliant carriers to avoid travel when officers are likely to be on duty. Operating hours mean 48% of CMVs travel at a time when no scales are open.

Both AGs cited a lack of uniformity in how officers conducted inspections and laid charges, with wide variances between officers and districts. Oversight of how the officers performed their duties was also noted as severely lacking.

Major shortfalls in oversight of MVIS: Both AGs noted the provinces do not properly monitor stations that are licensed to perform annual safety inspections. There is little oversight performed to investigate shops to ensure they are performing valid safeties.

One of the ways we can ensure the safety of our roadways is to make sure vehicles are properly inspected both at the roadside and at the time of an annual safety. In Ontario, the AG first highlighted this as an area of concern in 1997, 22 years ago. To see little to no action in 22 years is simply something we should not accept from our governments.

On-site audit of carriers: Both AGs identified areas where the on-site audits of carriers to ensure compliance is severely lacking, either in the way these companies are tracked, or in the fact that too few on-site audits are conducted to ensure compliance. Many cases were discovered where carriers were allowed to continue to operate for many years with poor safety ratings with no consequences outside of the initial touch.

One of the best ways to ensure carriers are operating safely and promote safety practices within their company, is to perform on-site audits or reviews that highlight areas of concern. This allows provinces to work with carriers to help them improve, or eventually shut them down if they can’t or won’t.

If it is acknowledged that we have major shortcomings in addressing roadside performance, shops that perform safeties, and operational practices of carriers, we have an issue that needs to be addressed quickly.

We do have some good news. In Ontario, the industry and regulators have been working together for over a year now developing an action plan that was already uncovering and recommending ways to address issues like these.

The plan is coming along well, and consultations on how to implement the safety action plan are continuing in early 2020. The key, when this work is complete, is whether or not the province will support the program by supplying the resources to implement the program effectively. Let’s hope that does occur this time, as in the past this is where best laid plans ended.

As a carrier, would you be allowed to say “Sorry, I simply don’t have the resources to implement the safety procedures you require?” If the answer is no for a carrier, as an industry we can’t allow government to use the same excuse. The time to act is now, and put your money where your words are.