TORONTO, Ont. – Multiple Ontario transportation enforcement officers (TEOs) have told Trucknews.com truck safety in the province is being compromised, due to a quota system that focuses on number of inspections conducted rather than quality, and an unsafe work environment.

“We are required to conduct 600 inspections per year and our professional development plan is noted if we do not,” one TEO told Trucknews.com on the condition of anonymity. “Ensuring officers obtain 600 inspections per year creates a data pool for the province to demonstrate we have some of the safest roads in the country, however it is done to the detriment of public safety as we are forced to focus on quantity and not quality of inspections. Clean sheet Level 2 inspections are not an accurate performance benchmark of carrier safety. We should be focusing on audit-pending and conditional CVOR operators to drill down on the high-risk carriers.” 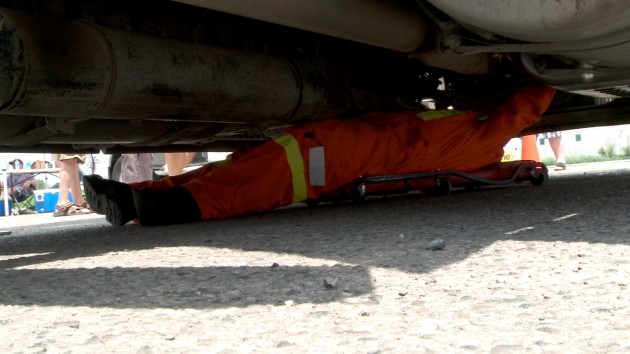 An MTO enforcement officer slides underneath a tractor-trailer during an inspection.

The aggressive quota system causes TEOs to focus on late model, clean equipment, rather than trucks that appear to be higher-risk, another TEO admitted.

“Especially near the end of the year,” they explained. “Officers will target 2019 or newer trucks to perform fast inspections. Worse, officers will avoid poor condition trucks because you will likely be tied up for hours. Officers province-wide will stop inspecting trucks carrying dangerous goods if nothing changes. We will focus on compliant carriers to achieve the goals set out by management.”

The quota system was confirmed in a report commissioned by the MTO and provided by the Public Services Health & Safety Association (PHSA) in June, 2019. The 275-page report, obtained by Trucknews.com, reads “The Ministry of Transportation has set a threshold of approximately 600 inspections per year to meet TEO2 performance expectations.”

“It is extremely difficult to uphold my inspection quotas in the winter due to snow accumulation and reduced safe roadside locations to pull trucks into, yet, I do obtain my numbers,” a patrol TEO told us. “But I believe I compromise driver and my safety at times in order to maintain my quotas. My patrol vehicle has not been upfitted with red and blue emergency lights as it is deemed to be too expensive to upfit older units, yet officers who are not designated as area patrol officers are assigned units with blue and red lights. Cost is the determining factor, not officer safety.”

Another TEO said “We have been flat out told quality doesn’t matter, just stop and inspect 600 or more because our bonus is attached to total inspections.”

As reported last week by Trucknews.com, Ontario enforcement officers are disgruntled with work conditions they say compromise their safety, and management’s apparent unwillingness to improve them. Last week, all TEOs in the province were taken off the job for several hours while the Ministry of Labour (MOL) investigated a safety complaint.

“The Ministry of Transportation temporarily suspended truck inspections across the province while the Ministry of Labour, Training and Skills Development investigated concerns about worker safety, specifically the risk of violence,” the Ministry of Labour confirmed to Trucknews.com. “The temporary suspension began at 1:06 p.m. on Jan. 23, 2020 and operations resumed at 4:44 p.m. the same day. The investigation has been completed and no orders were issued.” 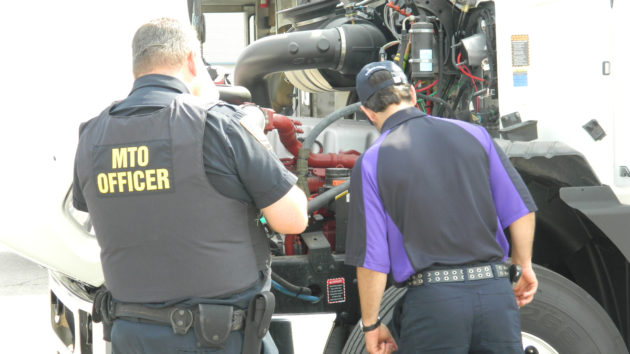 Enforcement officers told us they felt the O.P.P. was providing false reports on criminal checks. The PSHSA report, titled Enforcement Program Assessment for Carrier Enforcement Program Office Ministry of Transportation, highlighted many safety issues faced by frontline enforcement officers. The PSHSA audited the MTO, awarding it a score of 36.33% actual compliance versus a desired compliance rate of 75%. One TEO told us it took a Ministry of Labour intervention for officers to obtain access to the report.

On July 4, 2019, the Ontario Public Service Employees Union (OPSEU), the union representing MTO transportation enforcement officers, was informed “The ministry will be developing an action plan to address the recommendations identified in the report.”

But TEOs say little has changed. “We are unaware of any action with the exception of updating the Health & Safety boards,” a TEO has told us.

Among the safety concerns identified in the report is confusion over the officers’ enforcement capabilities. While TEOs are recognized as peace officers under the Highway Traffic Act, it’s unclear whether they are also classified as such under the Criminal Code of Canada. In fact, the report indicates the Enforcement Policy Manual given to TEOs adds to the confusion regarding their rights as peace officers. The PSHSA recommended a rewrite of the manual to add clarity.

“Review and clarify the use of the term peace officer and provide direction to the TEO as to whether they are also considered peace officers under the Criminal Code of Canada, which provides a different level of authority,” the report recommended.

Officers also say the MTO provides inadequate training on things like conflict de-escalation and sharp-edged weapon defense. One TEO told the PSHSA during interviews that “If we are wearing soft body armor (vest), someone assumes there’s a risk of enforcement officers being shot. If someone is shooting at me, I have no means to defend myself other than a baton.”

Another added “Self defense relies on the strength of the enforcement officer.”

Because their uniforms closely resemble those of the O.P.P., officers say they are at heightened risk with violent offenders but lack the means available to police to defend themselves.

“There was a lack of consistency with the physical setup of the various stations, including access controls, CCTV (closed circuit television cameras) monitoring and locations, security measures in place (and) driver reception areas,” the report read.

It went on to say some inspection stations have no security systems in place, despite the presence of expensive computers, no safe rooms or places to seek shelter, and that they lack bollards or planters to protect the buildings from vehicle impact, intentional or otherwise.

TEOs who spoke to Trucknews.com said management has been unresponsive to their safety-related concerns. One TEO told the PSHSA “Management does not respond to health and safety concerns in a timely manner and does not follow the timelines in the terms of reference. There is unusual pushback and lack of support from management when health and safety concerns are brough forward.”

But MTO spokesman Joshua Henry said that’s not the case.

“The health and safety of these officers is important,” he said in an email. “Ministry management cooperated fully with the (Jan. 23) Ministry of Labour investigation, which is now complete. The investigation found that there were no conditions present that met the criteria for a work refusal. As a result, all employees have returned to work.”

Multiple TEOs, however, have told Trucknews.com the dispute is far from over, and further work action can be expected.

“In late summer 2019, some 150 officers jointly signed and submitted a Poisoned Work Environment group grievance against the employer which is still ongoing,” a TEO told Trucknews.com. “The incident that sparked this past week’s work refusal is only one incident which has been quickly designated as closed – nothing to see here – but officers will be appealing the ruling. In addition, there are 15 other incidents which must also be investigated prior to the MOL concluding their investigation, so the statement from program management is not entirely accurate.

“In summary, this is a public safety law enforcement agency in distress being smoke-screened by program management…MTO enforcement officers bring a wealth of experience and are all fully CVSA-certified. MTO officers conducted 91% of the CVSA inspections conducted last year and play a vital role in ensuring public safety on provincial highways.”