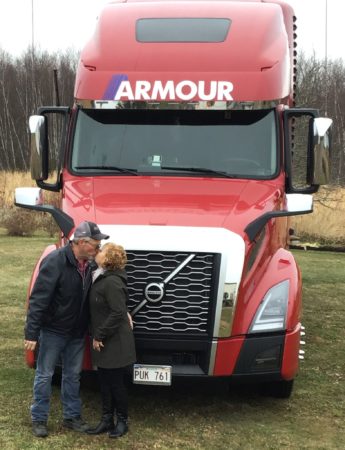 “She is an angel.” Bruce Cail with his wife Phyllis.

MONCTON, N.B. — Humility is the hallmark of Bruce Cail. In November, the 63-year-old trucker achieved a safety milestone by topping 4 million accident-free miles, a feat most people would boast about.

“It’s a lot of good luck, and some good management,” Cail told Truck News after being honored by his employer, Armour Transportation Systems.

Armour attributed Cail’s accomplishment to his tireless dedication to safety, each and every mile.

“Four million miles is like driving to the moon and back eight times, an accomplishment that most of us may find hard to really comprehend,” said Dave Miller, vice-president of human resources, loss prevention, safety and compliance at Armour.

Miller called Cail a great ambassador for Armour and for the industry as he is always happy to help, answer a question or provide assistance.

“We are proud to recognize Bruce for his achievements and all that he does each and every day.”

Growing up on a New Brunswick farm, Cail recalled, big machines attracted his attention early on.

He drove farm tractors at age six or seven, he said, but the real inspiration was his brother Fred, who drove trucks all his life. In 1975, Cail quit Grade 10, and went on to work at a car dealership as a salesman. About a year later, he moved to a division that rented trucks.

Soon, he was on his way to a trucking career.

“I went and got my licence one day, and the next day I was on the road,” Cail chuckled. 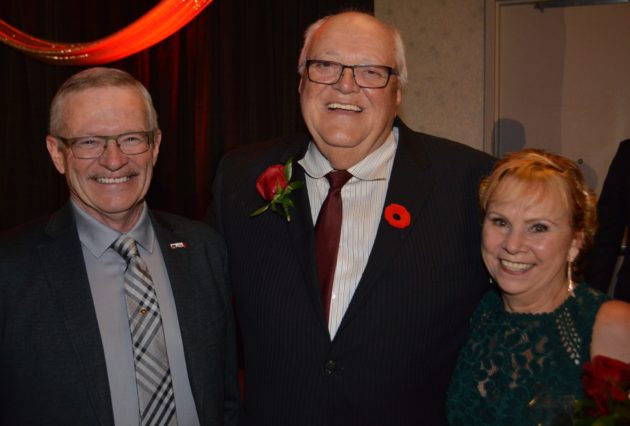 Bruce Cail and his wife Phyllis with Wes Armour, president and CEO of Armour Transportation Systems.

On the road, driving a Coca-Cola truck in the Maritimes. Six months into his new job, when Armour won the contract for Coca-Cola, the company hired Cail too.

“They took me in the bargain.”

He has since been with Armour, first as a company driver, then as an owner-operator before deciding to drive for the company again about four years ago.

“(Company president and CEO) Wes Armour to me is like a brother,” Cail said.

He got rid of his six trucks after it became too expensive to maintain them.

“I am very happy now, doing what I am doing.”

Cail plans to work full-time until he turns 66, and take winters off after that. He said the key to safe driving is not to exceed speed limits, and that he always follows road rules. He said some companies are putting new drivers on trucks too soon, posing a safety hazard. Even some of the trainers are not properly trained, Cail bemoaned.

“They should have at last five years of experience before they become trainers.”

Cail loves to drive in the Maritimes, and is not really a fan of the Greater Toronto Area.

“I don’t like going to Toronto anymore. So much traffic. I will stay away from that if I could,” he said. 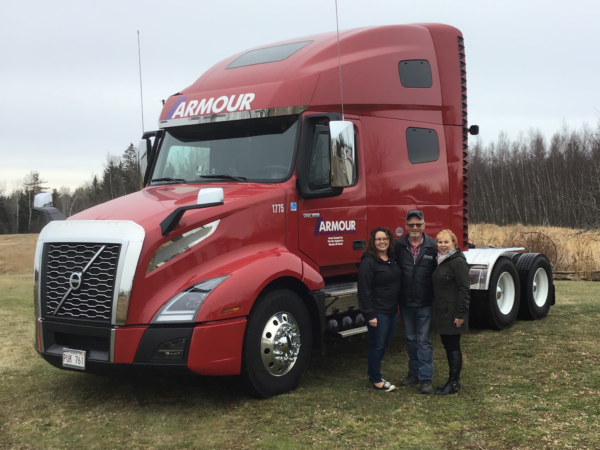 A supporting family: Bruce Cail with his daughter Rhonda and wife Phyllis.

As for his family, Cail said his daughter Rhonda, stepson Rodney and wife Phyllis all have been very supportive.

“She is an angel because she has been putting up with this over 40 years,” Cail said of his wife.

Rhonda said she is “beyond proud” of her father and his achievement.

“These miles kept him on the road and away from his family, but he loves the job and the open road,” she said in an email to Truck News.

“He has always been a safe driver, and has given me and my son many safe driving tips.”