TORONTO, Ont. – A Canadian tech start-up is looking to electrify landing gear, and has developed a currently available adaptor to ease the job for drivers.

Omid Beik, founder of Enercs, first became aware of the demands of deploying landing gear when reading about the Humboldt Broncos bus crash, in which 16 people were killed following a collision with a semi. 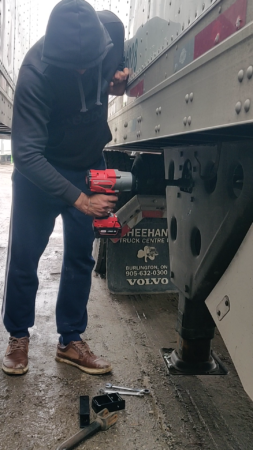 An operator uses an adapter attached to an impact wrench to lower landing gear.

“One person said these drivers, they work 14 hours a day, they’re exhausted. Then at the end of the day the have to crank landing gear. That was my first introduction to landing gear,” Beik said in an interview with Trucknews.com. Beik, who has a Ph.D and a masters in electric motors, felt “There has to be a better way to do it.”

He discovered it takes 100 lb.-ft. of torque to properly lower the landing gear.

“That is massive for any human being to operate,” he said.

Beik reached out to trucking fleets, which expressed support for a product that would make cranking the landing gear easier, as long as it was priced reasonably. Other products on the market cost US$675. So Beik invented an adaptor that fits on any electric impact wrench. The driver simply attaches the impact wrench (not included) to the adaptor and then can raise or lower the landing gear quickly at the press of a button.

It retails for $49.99 and is available today (orders currently must be placed via email, at sales@enercs.com).

But Beik has grander visions for the application and is currently working on an electric motor that will tap into the truck’s 12-volt power source. He has built a rare earth-free electric motor, which reduces cost significantly.

“Thirty to 50% of the price of the motor is the magnets, we eliminate that,” he explained.

The company now has five patents pending. Biek hopes to commercialize the electric system within a year, and is in talks with landing gear manufacturers to integrate. Eventually, as trucks become more automated, Biek feels autonomous landing gear will be required. But that brings challenges such as theft prevention, which the company addresses through use of an RFID tag assigned to a driver.

Work continues on the electric landing gear, with all the company’s manufacturing and development taking place in Concord, Ont. 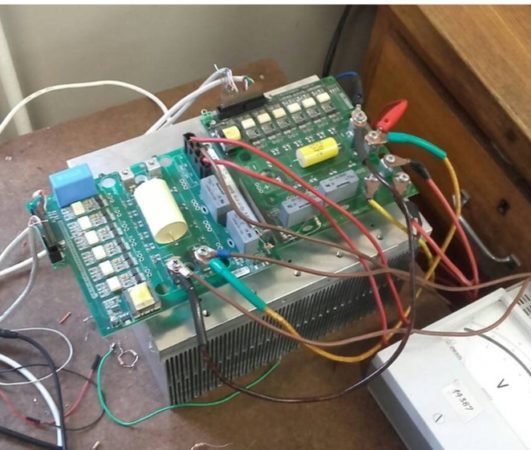 The motor controller in development.