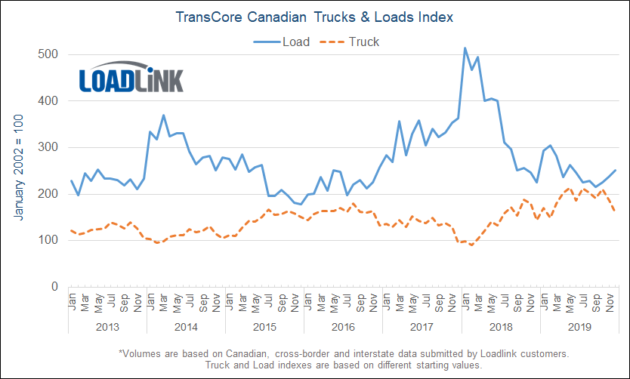 TORONTO, Ont. – Canada’s spot market ended 2019 with a strong fourth quarter, with load volumes increasing and truck volumes on the decline, according to the latest data from TransCore Link Logistics.

TransCore saw an increase in capacity in 2019, which combined with weakened freight demand to see greater truck availability year-over-year in every month except February. Overall equipment volumes were the highest in Loadlink’s history in 2019.

December’s equipment postings declined 14% compared to November, but were up 11% year-over-year. The truck-to-load ratio in December tightened by 19% to 2.87, from 3.43 in November.

December’s spot market rates were up 2% both month-over-month and year-over-year.

“The past year proved to be a tumultuous period for the freight industry following a booming 2018 when freight volumes reached new highs,” TransCore concluded in a release. “An overabundance of capacity, global trade uncertainties, rising insurance costs, and depressed rates all played an evident role in the decline of the overall Canadian freight market. Canadian spot market conditions may have faltered compared to a remarkable 2018, but proved to be more consistent and in-line with steadier periods seen in recent years.” 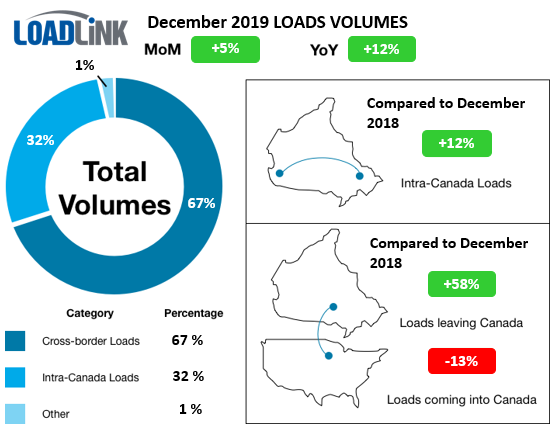