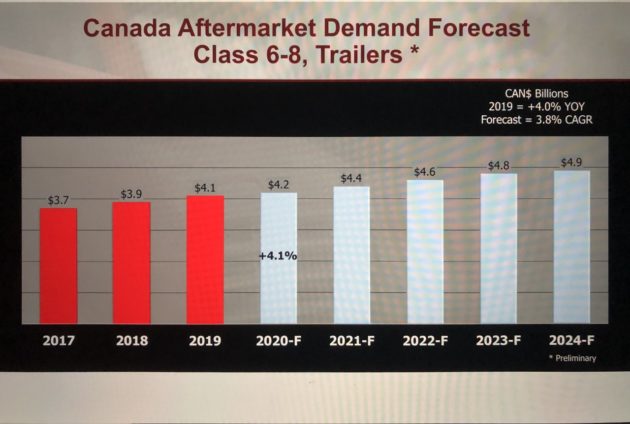 Canadian dealers accounted for 51% of those sales, leaving 17% for heavy-duty distributors, 13% for independent garages, and 8% for specialists. The remainder was split between engine distributors, auto parts stores, and other sales channels, the figures show.

This bettered the growth of the national gross domestic product and also topped inflation figures, but it was still lagging behind the 5.7% growth experienced by aftermarket businesses south of the border. The U.S. aftermarket is now valued at a comparative US $31.6 billion.

Some of the growth has come in the form of higher prices. Canada’s parts pricing rose 3.7% in 2018, and when final numbers are calculated they are expected to have risen 2% in 2019. Looking at the year ahead, MacKay and Company expects parts prices to rise 2.4%.

As for vehicle sales in the year to come, Canada is “somewhat of a flat market,” said John Blodgett, MacKay and Company’s vice-president of sales and marketing.

The drops in Class 8 truck sales are expected to be the most significant in the year to come.

“They’re not terrible. They’re still above where we’ve been for the average of the last 10 years,” Blodgett stressed. 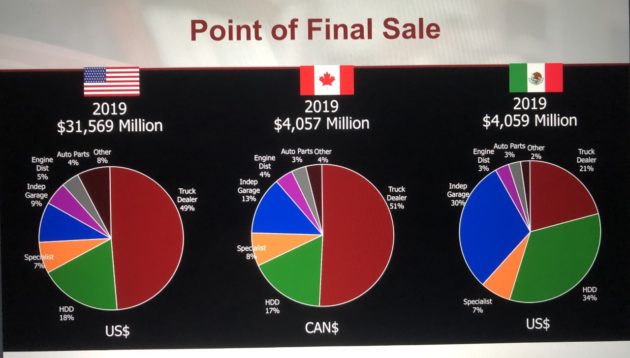