Cryopeak to haul LNG by Super B – a Canadian first

The company designed the unit, and outsourced the manufacturing to Karbonsan Pressure Vessel and Trading, based in Turkey. The equipment is now in Richmond, B.C., and undergoing final certification for Canadian shipments. 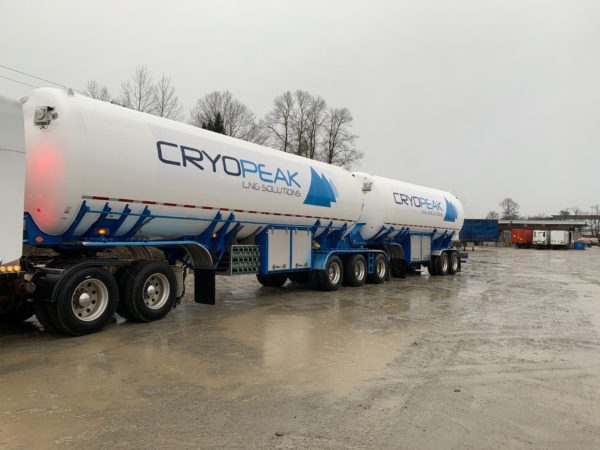 “We used the Canadian rules to maximize the envelope of what can be transported,” Cryopeak CEO Calum McClure told trucknews.com, referring to shipments that will travel the Alaska Highway and beyond.

“It will serve remote communities, and also we have some mines up there that use liquefied natural gas.”

Four of the trailers are scheduled to be in service early this year.

The fleet already has 16 traditional tankers serving customers, along with other equipment to store and vaporize the fuel. It has six dedicated truck drivers, and supplements that team with subcontracted owner-operators and fleets as required.

The customized equipment was required because there were no other options to move the fuel by Super B, he said.

Compared to gasoline or diesel, natural gas eliminates up to 30% of carbon dioxide emissions and produces up to 95% less nitrogen oxide (NOx), Fortis BC says. There is virtually no particulate matter to deal with, either.

The LNG faces a barrier to becoming a widespread trucking fuel in Canada, however, because OEMs are not currently producing large-displacement natural gas engines.