MISSISSAUGA, Ont. – The problem of the driver shortage in Canada is a “self-inflicted” wound, a panelist told the Surface Transportation Summit on Wednesday.

“What I think may not be a popular belief in the room, but it’s a little bit self-inflicted,” said Jane Jazrawy, co-founder and CEO of the online driver training platform CarriersEdge.

She said the conversation needs to change as companies in Canada have been talking about the problem for years without doing anything about it.

Jazrawy pointed out that in the U.S., there are outreach programs to high schools and women to fill the gap, whereas in Canada no such effort is being made to tap the large female labor pool.

“There is also a shortage of imagination as to how to attract people into trucking.”

She noted that women account for more than 50% of Canada’s population, yet only 3% of truck drivers are females.

Craig Faucette, director of policy and programs at Trucking HR Canada, said there are 22,000 driver positions open in Canada now.

Max Farrell, co-founder and CEO of the consulting firm WorkHound, said the turnover in the industry is high because the drivers feel they are not being respected.

“The only option for drivers to have a voice up to this point has been exit interviews, which is basically an autopsy,” Farrell said.

Colin Ruskin, CEO of Driver Engagement, said the way the drivers are compensated is “just ridiculous”.

“The industry needs to change and we need to start talking about wasted capacity, and I think we need to talk about convoluted pay structure,” Ruskin said. 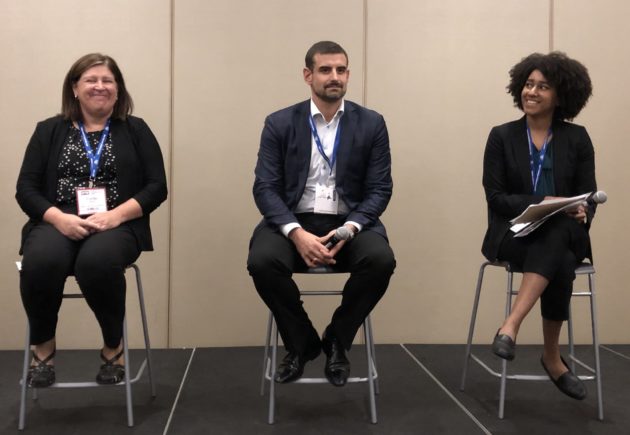 Another panel focused on workplace safety, and the speakers argued that there is no short-cut to establishing a safe working environment.

A major problem, they agreed, is a lack of proper communication between the employer and the employees.

It is crucial that companies have safety workplace protocols in place, he said.

Yvette Lagoris, president of the Ontario Truck Training Academy, said her organization has a strict regime, and doesn’t allow students on trucks before they complete three weeks of training.

On the eve of the pot legalization anniversary, the panel also discussed the use of cannabis at workplaces, especially at safety-sensitive jobs.

Earlier this year, a study by the Conference Board of Canada revealed that 48% of safety-sensitive industries had yet to introduce a zero-tolerance policy on cannabis because of a lack of clarity on issues such as privacy and impairment.

Employment lawyer Zeinab Yousif of Miller Thompson LLP said many companies are still struggling to come up with proper protocols to deal with the issue.