But the index ended the year on a soft note, with both volumes and spending decreasing in the fourth quarter. U.S Bank attributes this softness to weaker economic activity and difficult comparisons to a strong Q4 2018.

According to the report, “The U.S. Bank National Shipment and Spend Indexes ended 2019 with drops in both quarterly and year-over-year metrics due to weaker economic activity, including a slowing manufacturing sector. While spending was up 3.4% over 2018, trucking experienced a tough year in shipments as well as spend.”

“I think it’s remarkable that overall spend was up on a full-year basis for 2019,” said Bob Costello, senior vice-president and chief economist for the American Trucking Associations. “It shows great resiliency given the challenging freight environment. Even though the U.S. economy is not in a recession, the factory sector is, and it’s absolutely impacting truck freight volumes and spending. But there are some bright spots. The U.S. has taken the first steps of an agreement with China, and spending is up in some parts of the U.S. due to a surge in construction activity.”

“Although we’ve seen some slowdown, we will be looking for inventory levels to even out and the trucking supply to come back into balance,” added Bobby Holland, U.S. Bank vice-president and director of Freight Data Solutions.

The U.S. Bank National Shipment Index fell 4% in the fourth quarter, after rising a total of 10% in the second and third quarters. Irregular trade volumes hurt truck freight movement, U.S. Bank reported. Other reasons for a decline in shipments include contracting factory output due to softening demand for exports, and fewer imports from China. U.S. Bank is expecting freight levels to remain sluggish into the second quarter of 2020 as companies work down inventories.

More info on the index is available here. 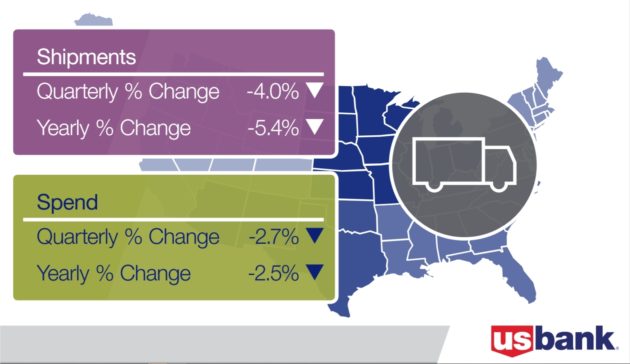