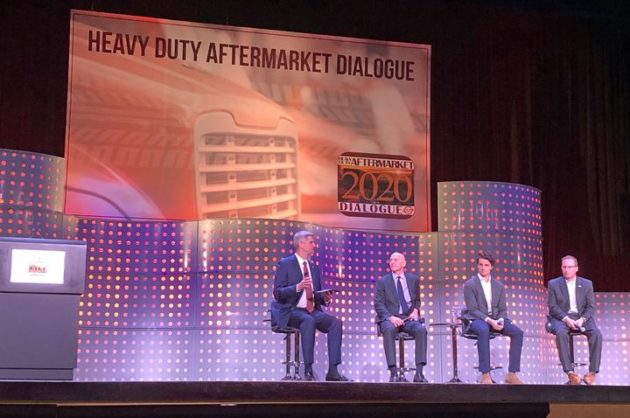 GRAPEVINE, Texas — No trucking industry meeting would be complete without a discussion of future technology, especially given all the technology changes currently in the works. The Heavy Duty Aftermarket Dialogue in Grapevine, Texas, did its part to make sure trucking suppliers were educated on future technology, featuring a panel that focused largely on electric trucks.

Moderator Brian Daughtery, chief technology officer for the Motor and Equipment Manufacturers Association, kicked off the session by asking panelists to talk about the time frame and applications for deployment of electric vehicles.

Sordoni cited government statistics that show that 2/3 of the freight moved in the U.S. in 2018 only moved 100 miles. “Routes that are short — 150 miles or less — and return to base and predictable routes are suited for electric vehicles,” he said.

Roeth said electrification will start with smaller and medium-duty trucks. “There are early adopters where electric trucks make sense, not from an if standpoint, but from a when, where and how many perspective.”

Plomin noted that one high-use case for electric vehicles is the bus market — both transit and school.

What about the grid?

In conversations about widespread adoption of electric trucks, there always are concerns about the readiness of the charging infrastructure.

Roeth said typically, new technologies follow a crawling, walking, running model, and that lessons learned in the early stages of adoption of electric vehicles need to be passed on quickly.

Sordoni noted, “The availability of electric power will inform real estate decisions for fleets.” He added that while there are only a few places that currently could handle charging a Class 8 vehicle, there are plenty of places with enough power to charge medium-duty trucks, especially if they are not all charged at the same time and if fleets rely on smart and dynamic charging. He also said that utility companies are motivated to help with the transition to electric vehicles – in fact, there are programs available that will cover the costs of the infrastructure to get the electricity to the charging station.

Return on investment is a key concern for fleets regardless of the technology they choose to invest in.

Plomin said the market is showing interest in electric trucks, but contended that without government help there is no business case for them.

Fleets look at total cost of operation when determine ROI, and unfortunately, according to Roeth, “There is a question about resale value of [electric] trucks.” He added that it is not yet clear if fleets will keep electric-powered vehicles longer to get better return, but added that prices are coming down, which will impact ROI.

Sordoni explained that early electric trucks will be more expensive because no one OEM will be building enough to achieve the advantages of scale. He added, “We have not seen any great success in the resale of EVs because the technology is changing so quickly.”

Recent developments indicate that hydrogen fuel cells might help address some of the questions about battery-electric trucks.

Roeth said EV in commercial applications currently have limitations. “When you look at trucks going 400 miles, you are talking a lot of batteries. But there are different ways to store energy, so there are other options.”

A question of support

Audience members were able to ask the panel questions, and several people wondered about how some of the new start-up OEMs that are making electric vehicles would support the aftermarket. Plomin said, “The traditional OEMs’ strength is in relationships, and startups will try to replicate that. That will take cooperation.”

Sordoni acknowledged that “there are lot of good companies that make good trucks.” In fact, XOS actually contracts out the truck assembly and keeps its focus on the battery technology.

Since HDAD is an aftermarket event, one audience member asked about what the distribution channel needs to do to get ready for electric vehicles. Plomin said that distributors count on suppliers to educate and train them. “Training needs a multi-pronged approach.” He also reminded meeting attendees that there will always be some mechanical parts, and added, “never underestimate the creativity of the aftermarket.”

Several questions were asked about platooning and autonomous vehicles. Roeth said he believes platooning is not dead because of the 4% fuel savings it offers, but that fleets will have to do work on routing to make effective use of platooning.

As for autonomous vehicles, Sordoni pointed out that many drivers do more than just drive, including loading and loading. “They are often seen as the face of a business by its customers.” He added that “fleets are interested in safety, not necessarily autonomous trucks.” Many of the current advanced driver assistance systems that are making trucks safer are also the building blocks for more autonomous operation.