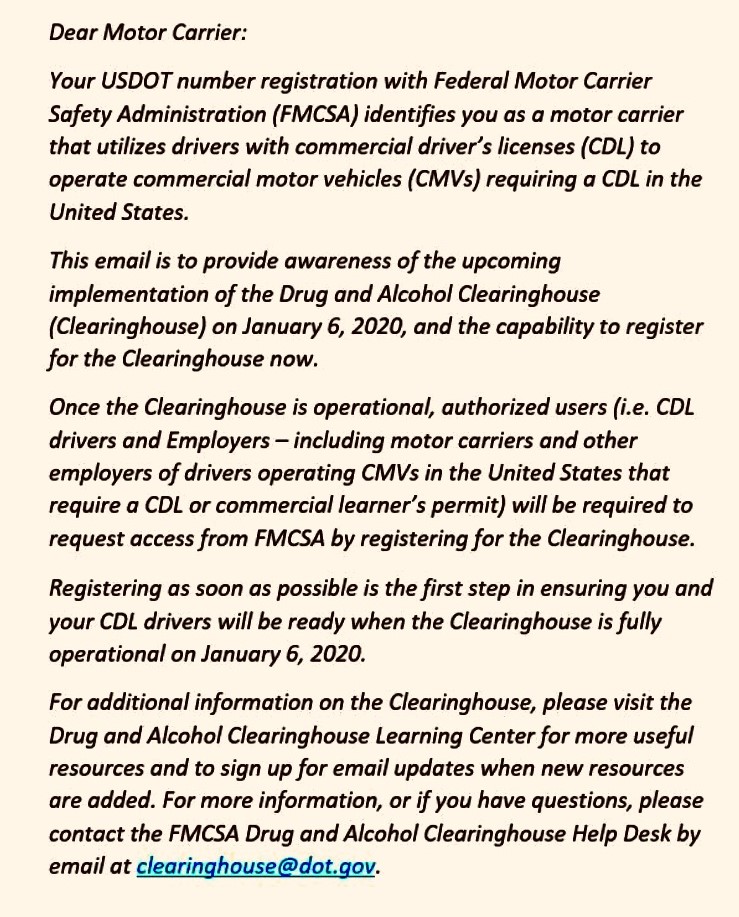 This email was sent to about 10,000 Canadian and 4,000 Mexican motor carriers Thursday.

WASHINGTON – The U.S. Federal Motor Carrier Safety Administration has written to about 10,000 Canadian and 4,000 Mexican motor carriers, reminding them of the impending implementation of the Drug and Alcohol Clearinghouse program, the agency said late Thursday.

The Clearinghouse is an online database that will give employers, regulators and law enforcement personnel real-time information about a commercial driver’s drug and alcohol violations.

“Once the Clearinghouse is operational, authorized users (i.e. CDL drivers and employers – including motor carriers and other employers of drivers operating CMVs in the United States that require a CDL or commercial learner’s permit) will be required to request access from FMCSA by registering for the Clearinghouse,” the agency said in the email.

“Registering as soon as possible is the first step in ensuring you and your CDL drivers will be ready when the Clearinghouse is fully operational on Jan. 6, 2020,” it added.

FMCSA spokesperson Duane Debruyne later told Truck News that the email doesn’t necessarily mean that all the 10,000 Canadians fleets have yet to sign up.

“That’s the number of Canadian carriers we show with operations in the U.S.”

The agency has previously made it clear that all Canadian and Mexican employers who are currently required to comply with DOT and FMCSA drug and alcohol testing requirements must comply with the new rule.

“Canadian and Mexican motor carriers will follow the same procedures as U.S.-based motor carriers to query and report to the Clearinghouse,” it said.

While most Canadian DOT drivers are aware of the program, just about half of the fleets in this country are ready for it, according to Branden Kearse, privacy and compliance coordinator at DriverCheck Inc.

Kearse said the U.S. Department of Transportation had done a pretty good job in spreading the word about the program by publishing brochures and conducting web conferences since the beginning of this year.

And, about half of Canadian DOT fleets are prepared for it, he said.

“Unfortunately, a number of fleets are having a very hard time registering their companies with the DOT Clearinghouse website, or they are struggling to login into their FMCSA portal account to manage DOT permissions regarding their fleet.”

Kearse attributed the problem to website and password glitches, but he said DOT fleets should be prepared to hit the road running, come Jan. 6.

The FMCSA, which announced a final rule establishing a national drug and alcohol database for commercial truck and bus drivers in December 2016, has called it a new technological tool that will make roads safer.

The agency said at the time that the purpose of the Clearinghouse is to maintain records of all drug and alcohol program violations in a central repository, and require that employers query the system to determine whether current and prospective employees have incurred a drug or alcohol violation that would prohibit them from performing safety-sensitive functions.

“This will provide the FMCSA and employers the necessary tools to identify drivers who are prohibited from operating a CMV and ensure that such drivers receive the required evaluation and treatment before resuming safety-sensitive functions.”

Once the program goes online, employers will be required to report and query information in the database when looking to hire new drivers.

Under privacy rules, the program requires an employer to seek driver consent before accessing his or her Clearinghouse record.

But if a driver refuses to cooperate with what is called a full query, an employer is to remove that driver from any safety-sensitive DOT functions including driving.

It will also be difficult for a driver with a violation in one state to apply for a license in another as the Clearinghouse record will be available to all jurisdictions.

All drivers are not required to register. Only those looking for employment or wanting to view their own records need to sign up for the program.

Drivers who register before Jan. 6, will have their Clearinghouse accounts and contact preferences set up, allowing them to quickly respond to query requests from employers on or after that date, the FMCSA says on its website.

The agency estimates the Clearinghouse will generate an annual net benefit worth $42 million, with crash reductions resulting from queries by regulated motor carriers.