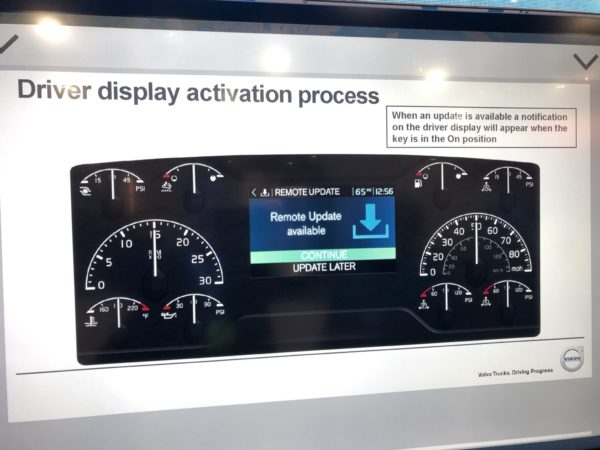 ATLANTA, Ga. — Mack Trucks unveiled its version of driver-activated Over The Air Updates capabilities at the 2020 TMC Annual Meeting. Over The Air Updates is a remote software that enables customers to activate their software updates on their own schedule 24/7 while also improving uptime, according to Stu Russoli, Mack highway product manager.

Just a couple of booths over on the TMC show floor, Volvo Trucks, which previously released its own Over The Air Update program, was giving transportation journalists overviews of the program to showcase the advantages it offers fleets and drivers alike.

Ash Makki, North American product manager, Volvo Trucks, said that Over The Air Updates now alert drivers when a system update is available. The alert, which appears in the center cluster of a Volvo or Mack dashboard, informs the driver as to what the system will be updated and how long the update will take. Makki confirmed Russoli, noting that the majority of updates now take less than 15 minutes, due to the “maturity” of the current generation of Volvo and Mack powertrains. “Most of our powertrains are now refined to the point where lengthy, major system updates are no longer necessary,” Makki said.

If the driver is in a situated where he or she cannot initiate the programming update, the system gives them a 28-window to do so, with an “Update” reminder icon flashing each time the truck is started up. The icon also displays constantly in a “background” setting on the dash panel while the truck is in service.

When the driver finally decides to initiate the update, Makki noted that Over The Air Updates sends a series of messages, repeating the amount of time required to complete the update and confirming that the driver does wish to proceed at that time. “As with any programming updates, we don’t want it to be interrupted once it starts,” Makki explained. “So we take extra messaging steps to make sure the driver is ready to begin the update and has ample time to allow it to finish.”

One important feature that both Russoli and Makki emphasized is a new password-confirmation screen that can shift the initiation command from the driver back to fleet managers. “We understand that some fleets will prefer to have control up the software updating process,” Russoli said. “If fleet managers opt for the the password confirmation screen, then a driver cannot initiate an Over The Air Update until they have received the proper password and can proceed.”

According to Russoli, Mack Over The Air, allows remote software updates and the setting of vehicle parameters through the OEM’s Mack GuardDog Connect integrated telematics solution. Available beginning in the fourth quarter of 2020, the new driver-activated updates eliminate the need for coordination phone calls with Mack OneCall agents, meaning most updates can be completed in less than 15 minutes.

— This article is reproduced under an editorial sharing agreement with Heavy-Duty Trucking magazine.