WINNIPEG, Man. – Manitoba’s announcement that it will increase the content of biodiesel in its fuel supply from 2% to 5% has been met with varying reactions from those in the trucking industry.

From the onset, the Manitoba Trucking Association (MTA) has opposed the move, not because it is against reducing the industry’s carbon footprint, it said, but because its members have experienced challenges with biodiesel blends, and they have expressed greater interest in alternative efforts, such as electrification.

“For a clean hydroelectric province like Manitoba, this is clearly the best option,” MTA executive director Terry Shaw said of moving toward electric vehicles, “so we are hopeful our government partners will change course on this recent announcement.”

Thomas Payne, president of Payne Transportation, is also against the increase in biodiesel to 5%, saying it simply is not good fuel for the province’s climate.

“It has a negative impact on performance and our guys will stay clear of it,” Payne said. “We can expect them to fuel more in North Dakota.”

Payne said his drivers, which are made up primarily of owner-operators, already use several additives to ensure the current 2% biodiesel mixture performs in cold-weather conditions, which is likely to increase with a higher percentage.

Payne also said he feels this increase is not the answer for Manitoba’s canola farmers – canola being a plant-based source of biodiesel.

“Our industry continues to get unproven technology forced on us with alarming consequences,” he said.

As Shaw pointed out to Trucknews.com, biodiesel is not present in the fuel supply in Northern Manitoba due to cold weather, where it can gel. As well, it is not used during certain months in the southern part of the province either, meaning for the province to achieve an annual average of 2% biofuel, MTA members have already seen 5% biodiesel content when fueling up. And, in order to now reach a 5% annual average, Shaw said fleets will see anywhere from 0% to an estimated 10% biodiesel content in fuel, which raises a red flag.

“Manitoba’s recent announcement on increasing the provincial fuel mandate was very specific to biodiesel, not biofuels,” said Shaw, “which, based on operability concerns, is problematic.”

The MTA has identified a set of criteria alternative fuels must meet for the association to show its support. The alternative fuel must provide energy equal to or greater than diesel fuel, cost the same as or less than diesel, provide tangible environmental benefits compared to diesel, and meet Canadian standards, be acceptable to the engine OEMs, and not negatively impact operability.

The MTA says biodiesel does not meet these criteria.

Shaw also said that with OEMs concerned with the increasing biodiesel percentages in fuel, the province, to meet its goal of reducing tailpipe emissions, could turn to increased renewable diesel – which comes from hydrotreated vegetable oil and can be used in higher concentrations than biodiesel, and even as a standalone fuel source.

“We understand that the renewable diesel currently being utilized in Manitoba comes from Singapore and The Netherlands,” said Shaw. “Creating and transporting a product literally halfway around the globe in an effort to reduce GHG is something our members have long questioned.”

Bison Transport, one of Canada’s largest fleets and based in Manitoba, uses equipment from an OEM that recognizes and supports the use of biodiesel up to a 5% mixture.

“There are several watch outs with biodiesel as concentrations increase,” said Mike Gomes, vice-president of maintenance with Bison, “but at this level, we expect there will be no noticeable difference in performance, provided the products meet or exceed standards, such as ASTM D975 or CAN/GCSB-3.520.”

Gomes said Bison will monitor truck performance with the increased percentage of biodiesel, and that one way to ensure peak performance is to purchase fuel at a reputable supplier.

Bison also uses additives in their fuel to avoid biodiesel mixtures from gelling or forming crystals, which it can do in cold weather conditions.

“With the nature of our operation, we must purchase some fuel in southern states during the winter season, and when the temperature dips to extremes, we do utilize additives in our tractors and temperature-controlled trailers to provide protection from gelling in these scenarios,” said Gomes. “Again, we source only high-quality products that provide the proper level of protection without adverse effects on the performance of the equipment.”

Bison does not expect its costs to increase with the use of B5 (5% biodiesel mixture) diesel, nor does it believe truck performance will be negatively impacted.

Much of that confidence comes from the carrier’s continued investment into technology and driver training program, all in an effort to effectively manage fuel performance.

“This includes aerodynamic technology on both the tractor and trailers and idle reduction technology to support driver comfort while limiting the need to idle,” said Gomes. “We train our operators on driving strategy to improve economy and utilize scorecards as a coaching tool to encourage top performance. We view this change as a positive in the overall strategy to reduce GHG emissions and will continue to provide feedback to the industry and regulators through associations, such as the MTA.”

Alternatives to increasing biodiesel content in fuel to reduce GHG emissions the MTA have advocated for include incentive programs for the use of technology, regulatory reforms, such as approving the use of single wide-base tires, and electric vehicle pilot projects. 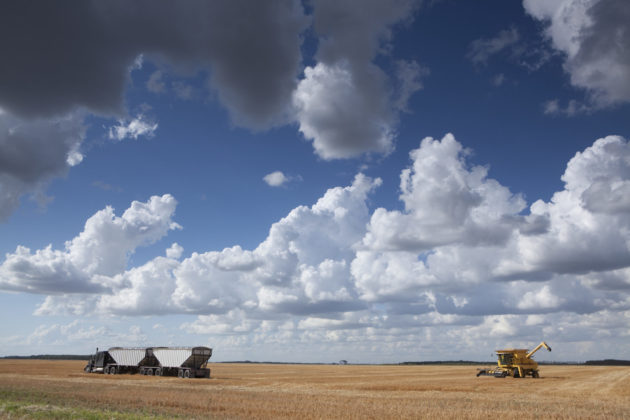 Biodiesel percentages fluctuate across Western Canada, with Saskatchewan providing a 2% blend year-round, while B.C. strives for a minimum B4 blend, less in northern regions where it can cause issues.

In Alberta, biodiesel is not to exceed 5%, and between Sept. 30 and April 1, the province reverts back to straight ultra-low Sulphur fuel to avoid gelling or the formation of crystals in the fuel during cold weather.

The Alberta Motor Transport Association (AMTA) pointed out that a report published by the Alberta Renewable Diesel Demonstration concluded that “B2 blends of canola methyl ester and 2% blends of hydrogenation derived from renewable diesel are fully operable in winter conditions in the study area when cloud points are adjusted to meet CAN/CGSB requirements,” with B5 blends being used during warmer months.

As part of its Made-in-Manitoba Climate and Green Plan, the provincial government also upped the ethanol content in gasoline from 8.5% to 10%.

“Manitobans deserve respect for our green agenda, our historic and significant investments in clean, green renewable energy,” said Manitoba premier Brian Pallister during the Jan. 21 announcement. “Our plan puts a price on carbon that is low and level, like the Prairies, and keeps more money in the pockets of Manitobans while getting the same amount of emissions reductions as the rising federal carbon tax. Our Made-in-Manitoba Climate and Green Plan is better for the economy, better for the environment and better for Manitoban families.”