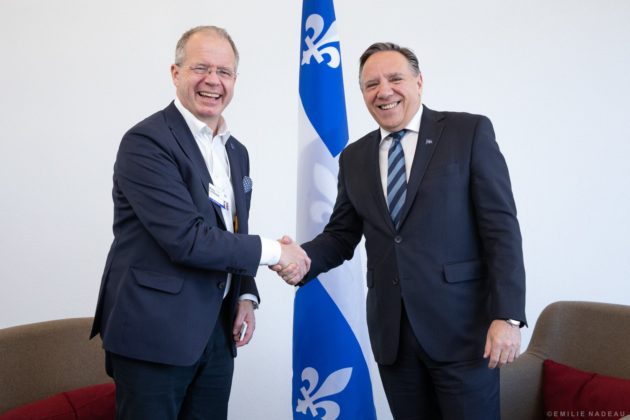 MONTREAL, Que. – Quebec Premier Francois Legault met with Volvo Group president Martin Lundstedt during the Davos world economic forum this week, and manufacturing opportunities in the province appear to have been on the agenda.

The two men “discussed the possibility of manufacturing electric trucks and buses in Quebec,” Legault said on his Facebook page.

Volvo Group has a manufacturing presence in Quebec in the form of the Prevost motor coach plant in Ste-Claire, which has also secured work to assemble military trucks for the Mack brand.

It is unknown whether Legault tried to convince Volvo to assemble vehicles in Quebec or to buy commercial vehicle electrification technologies that are produced in the province.

“Everything is on the table,” Ewan Sauves, Legault’s press spokesman, told trucknews.com.

“Quebec is more than ever ready to take part in the manufacture and assembly of electric cars, buses and trucks,” Legault added on his Facebook account.

The premier also spoke with other trucking representatives during the Davos meetings, including senior managers from Suncor (Petro-Canada).

“We discussed their proposed renewable diesel plant,” he wrote.

Other meetings with businesses that have a presence in Quebec included GE Renewable Energy and ABB, to discuss artificial intelligence.