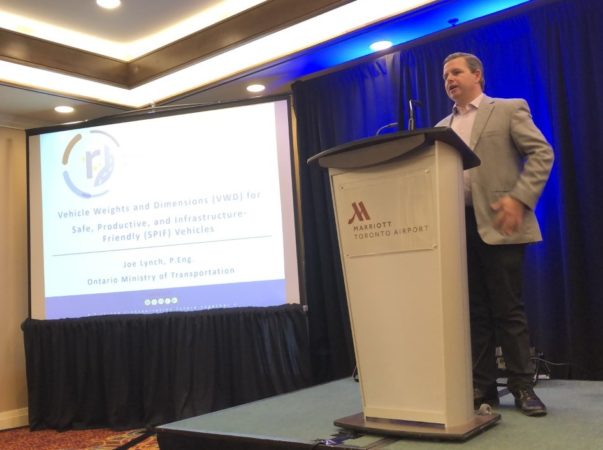 Joe Lynch of the Ontario Ministry of Transportation says many operators have discovered that they can still comfortably run within the weight limits established for equipment that doesn’t comply with SPIF.

TORONTO, Ont. – Ontario is approaching the final stages of a multi-year update to allowable vehicle weights and dimensions — but there are still some unanswered questions around at least one specific switch.

The rollout of Safe, Productive and Infrastructure-Friendly (SPIF) vehicle rules will allow an emergency lift axle override control on equipment built on or after Jan. 1, 2020, but only if the trucks or tractors come with an in-cab switch that can lift the self-steering axle and apply four-way flashers at the same time.

It’s all about offering extra traction when it’s required at relatively low speeds.

It’s an optional spec’, and the self-steering axles can also be lifted by using an exterior switch, says Joe Lynch, senior vehicle standards engineer with the Ontario Ministry of Transportation.

But a crowd that attended a related briefing hosted by the Canadian Transportation Equipment Association (CTEA) identified several challenges.

Many job sites, for example, will not allow drivers out of the cab if they wanted to use an exterior switch. The constant lifting and dropping of the axle as a truck moves back and forth in such a location could also strain the air system. For that matter, there are questions of whether suppliers will offer the chance to retrofit older trucks, and such controls would require a new generation of “smart” switches to combine the different functions.

The question of whether systems will be available to retrofit older trucks has been left to equipment providers, Lynch said.

“The switch configuration is a major issue because of the digital nature of dashes now. It’s not just taking a wire and jumping the wires,” explains Jeremy Harrower, manager of technical programs for the CTEA. The same challenge applies when it comes to the controls for liftable auxiliary axles in heavy applications. “We’ve had to work with the chassis OEMs right from the get-go.”

The association has been working to establish a solution through the Society of Automotive Engineers (SAE), and a related meeting is scheduled this week.

“It’s very doable,” Harrower insists. But it’s no small task to make a broad change in vehicle requirements based on a need for a specific market like Ontario.

In the meantime, the province’s trucking industry should be prepared for the other SPIF changes on the horizon, he adds.

“We get the question constantly, ‘Why are they trying to put us out of business?’ It’s not that. We’re trying to save our roads and save on taxes,” Harrower says, referring to the jurisdiction’s move away from fixed lift axles. “People that are aware are very aware. And those that aren’t [aware] are very surprised at what’s going on.”

There are other SPIF-related changes coming in 2020. Specialized tank trailers or other bulk tank semi-trailers with three or fewer axles have been grandfathered to Dec. 31, 2020. Truck and trailer combinations – if both are manufactured before July 2011, or one is manufactured before July 2011 and the other complies with SPIF rules – are grandfathered to Dec. 31, 2020 as well. Extensions are available beyond that point with a special permit.

Equipment built after July 2011 can be grandfathered under permit until 2026.

Many of those concerned about the changes discover that they can continue to conduct business the same way as they always have, complying with the lighter allowable weights that apply to “non-compliant” equipment, Lynch says.

The SPIF rules have also evolved since they were first enacted.

Changes introduced in July 2012 were made to accommodate technologies needed to meet tighter emissions standards and support alternative fuel systems. The grandfathering periods for Phase 3 vehicles were also extended by five years on January 2014, accounting for specialized equipment that was not heavily used during the economic downturn of 2008-09. A round of changes in January 2016 supported the use of emissions controls and alternative fuels when hauling B-train doubles, and also allowed rear-mounted boat tails.

Other changes to Ontario weights and dimensions in July 2019 removed weight restrictions on single tires, accommodated three-vehicle saddle mounts and smart lift axles, and added a specific reference to hauling boats with stinger-steer configurations. Long-wheelbase tractors up to 6.8 meters were also cleared for SPIF configurations.

A guidebook into Ontario’s vehicle weights and dimensions, including SPIF configurations, is available at https://www.ctea.ca/page/OntarioSPIF.