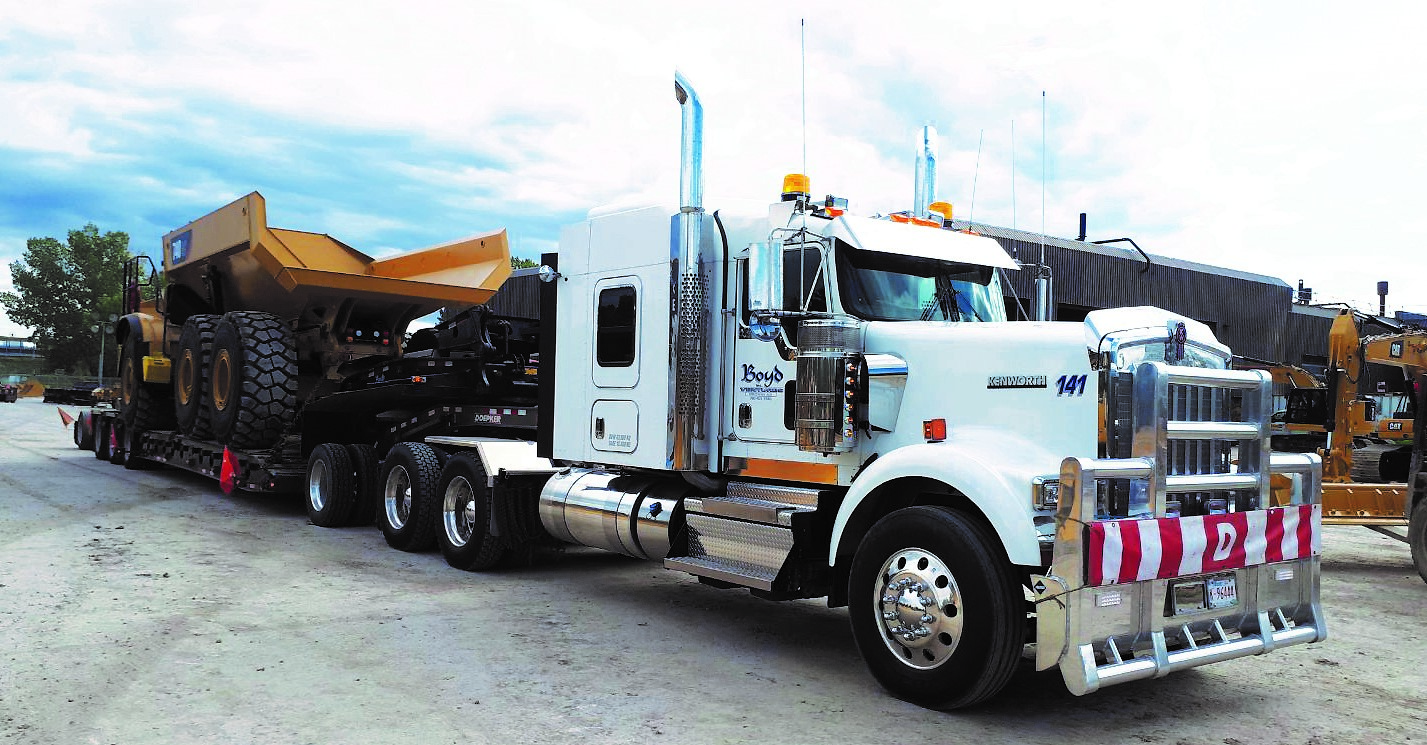 Long hours and hard work have paid off for Boyd Ventures, and its charismatic leader.

EDMONTON, Alta. — In Ron Boyd’s world, there’s no such thing as being too busy. For a man who loves his work, being busy is a blessing, and since the age of 17, when Boyd bought his first truck, the industry has never steered him wrong.

“I was raised around trucks all my life,” said Boyd. “When I was growing up, my dad had equipment and trucks, so that’s how it all started.”
Raised in Sudbury, Ont., Boyd soon ventured west, settling down in the thriving Wild Rose province in 1977. Working in the oilpatch and driving truck, Boyd knew he was somewhere special.

“I’ve watched Alberta rise and fall four times now, and this is the worst one,” Boyd said of the province’s most recent economic downturn. “This is a proud place to be from and I love this place. I love the work and the people I have worked with… It’s a phenomenal place to live.”

Boyd has long admired those who do not shy away from hard work, and he is no stranger to putting in the effort to get what he wants.

Those long hours have paid off for Boyd, operating his own company since 1983 – Boyd Ventures.

Hauling pretty much anything that fits onto a flatdeck, Boyd Ventures (previously called Boyd Trucking) services the oil and gas sector, as well as doing pipeline and powerline work. Starting with just one truck, the carrier now boasts 15 Kenworth and Peterbilt tractors, having focused on quality service as well as their ability to move unique pieces of equipment to spur the company’s growth over the last decade.

Thankfully, for a man who loves to stay busy, Alberta’s recent downturn has not had a negative impact on Boyd’s business.

“In the springtime, we usually have a month to a month-and-a-half when we’re slow and that’s when we bring everything through the shop, we fix everything and every six months we give everything a good once over,” said Boyd. “In the fall and in the spring we do that, and we do our regular maintenance.”

Finding experienced drivers has instead been Boyd’s challenge in recent years. With most younger drivers lacking the necessary skills to haul the type of freight the company moves, Boyd has had to look for older drivers to fill those seats.

Boyd is happy with his current staff, and says his employees appreciate the relaxed atmosphere at Boyd Ventures, while drivers love the freedom and trust they receive on a daily basis.

But Boyd is well aware that a new generation needs to step up to the plate, and key to their success is not only training, but also work ethic.

“You should have an internship, like they do anywhere else. You should be forced to have 400-500 hours to learn the trade and not just hold the steering wheel,” he said. “In today’s world it’s sad because you don’t have time to mentor people the way you should. But at the end of the day, you always try to find the right people who have the attitude that they want to go to work in the morning and they want to learn something.”

Running his company from a 10-acre plot in the Edmonton area, Boyd and his partner Sharon Fenske can see the finish line approaching. It just depends on when they will cross that line.

“You never really get away from it, it’s always here. We’ve paid the price. You sacrifice a lot owning a bunch of trucks,” said Boyd. “If the right government gets in, I’ll stay in it, if it doesn’t, I’ll get out of it.”

In the meantime, Boyd continues to take pride in his work. Every year, he works on one of his older trucks, rebuilding it from top to bottom over a two-month period. Why? Because he loves it.

“The one compliment we always get with our trucks, is we constantly here, ‘You guys have such awesome equipment,’” he said. “All our stuff is always clean, it’s always shiny…it looks good and people are always impressed with our stuff.”

And it’s not just his trucks that impress his customers.

“Our people are of equal quality,” praised Boyd “I’ve got awesome people who work for me. They do a hell of a job and we get tons of complements on our people because they are proud of what they do, and that’s pretty awesome to see.”