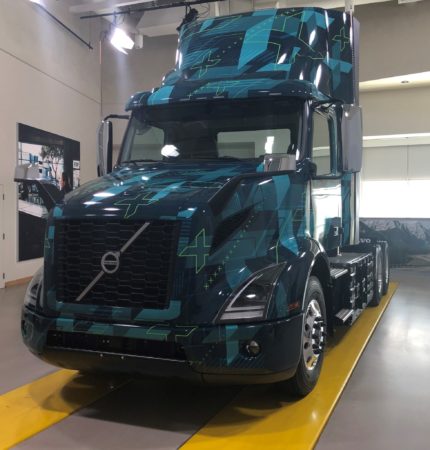 DUBLIN, Va. — Southern California will soon see the deployment of electric rigs, produced by Volvo Trucks North America in partnership with 15 stakeholders, with some of the funding coming from the California Air Resources Board.

The first Volvo VNR Electric regional haul tractor was unveiled in September at a media event at Volvo’s New River Valley facility in Dublin, Va., where all Volvo trucks sold in North America are built.

Volvo plans to deliver five trucks by the end of this year, and another 18 by April 2020 under the Low Impact Green Heavy Transport Solutions project, also known as Volvo LIGHTS.

The platform for the VNR Electric driveline is based on technology used in the Volvo FE Electric trucks, which is currently available in Europe. Commercial production of the vehicle will start by the end of 2020, said Brett Pope, director of electric vehicles at Volvo Trucks North America.

“We will start with a limited amount of production as we work to ramp up and secure the builds in our manufacturing facility,” he told Truck News.

Volvo has not announced the range of the battery, but Volvo FL Electric, the company’s first electric truck, offered a range of up to 300 kilometers per charge.

The project will also see the establishment of 58 public and private charging stations, including one of America’s first publicly accessible fast charging truck stations, as well as 29 zero-emission forklifts. 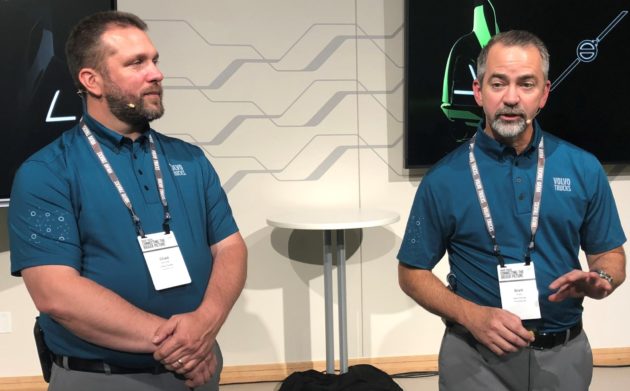 Chad Burchett, project manager of VNR Electric and Brett Pope, director of electric vehicles at Volvo Trucks North America, at the unveiling of the new rig.

In addition, solar panels will be set up to mitigate grid impacts and energy costs.

Volvo had previously considered bringing its European electric trucks to North America, but opted instead to electrify the VNR.

“This project will demonstrate the ability for heavy-duty, battery electric trucks and equipment to reliably move freight between two major ports and inland warehouses with less noise and zero emissions,” the company said.

Volvo will use a variety of smart technologies such as remote diagnostics, geofencing and the company’s web-based service management platform to monitor truck performance, it said.

Volvo LIGHTS will reduce an estimated 3,020 tons of greenhouse gas emissions annually, according to the company.